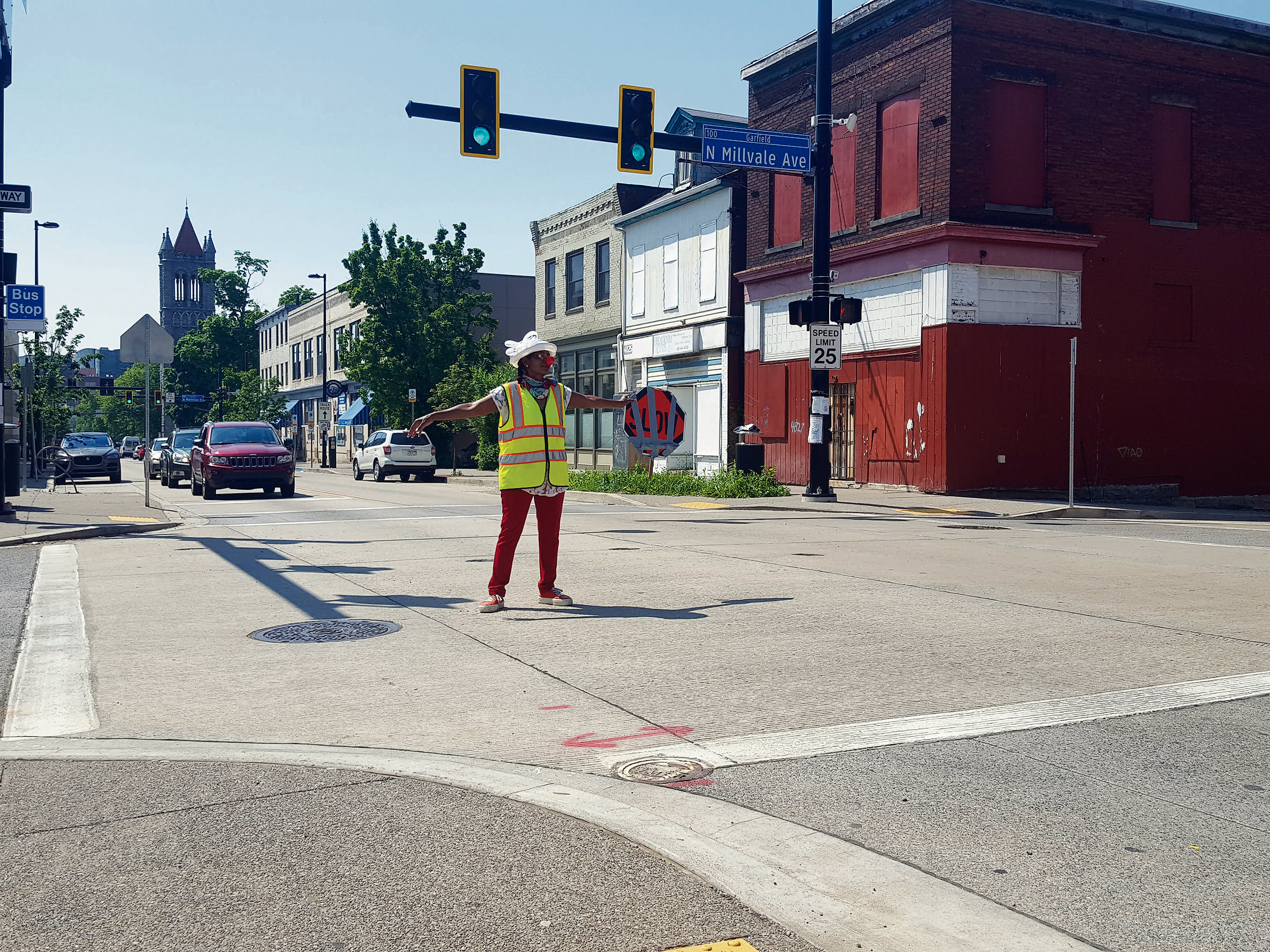 Garfield – Rose Parker keeps her head on a swivel as she looks up and down Penn Ave. The citizen crossing guard has lots of advice, both metaphorical and literal, for dangerous drivers that zoom past her unofficial post at the intersection of N. Millvale and Penn Aves.
“You’ve got to take the long view,” she said. “You’ve got to look ahead and slow down.”
Usually decked out in safety-signaling shades of red on most weekday mornings and afternoons during the school year, Parker stands guard for hours as Pittsburgh Public School (PPS) students like her grandson enter and exit various school buses. She regularly throws herself into traffic, as a mere volunteer, and hoists a hand-held stop sign while shepherding kids across the street – inviting all sorts of discourse with angry drivers.
“I’m trying to be reasonable, hoping that you see me standing there and realize that I’m there for a reason,” Parker opined to the hypothetical motorist. “If my shouting offends you, then you should ask yourself why I’m shouting. It’s not like I just woke up and said, ‘I feel like shouting at somebody today.’”
When The Bulletin last spoke with Garfield’s bravest community servant in May 2017 [“Citizen crossing guard provides safe passage on Penn Ave.” Vol. 42, No. 5], she was just wrapping up her first year of guard duty. Since then, things have obviously changed in the city’s East End, for better or worse.
A colossus of condominiums continues encroaching on Garfield from all sides, rendering Penn Ave. into a racetrack for some of the more inconsiderate condo-dwellers. As more people flock to – and commute through – the East End every day, the uptick in vehicular traffic puts a strain on Pittsburgh’s already problematic roadways. The City’s seasonal construction schedule does not help things, either.
“The City has been blocking off the bridges, so everyone’s looking for alternatives because they might miss that next light,” Parker said.
She jokes that her motivations for serving as a crossing guard are purely selfish; one of the students she saves from oncoming traffic “might end up becoming a doctor,” Parker noted. “Maybe they can help me live to be 135 years old. Am I being greedy?”
Garfield parents appreciate the crossing guard for reasons beyond her traffic-stopping heroics. Parker also goes out of her way to keep the lines of communication open between kids and their parents; whenever a student cannot call home for any reason, she offers up her cell phone to help them contact family members.
A bus driver for five years, Parker knows a lot about the safety protocols for both drivers and rider. In order to obtain a commercial driver’s license (CDL), she learned all the ins-and-outs of bus driving – from basic vehicle operations to more situational knowledge, like how long it takes the air-brake system to bring everything to a complete stop.
“I had to know the mechanics of the whole vehicle before I got my CDL,” she explained, “especially how to check the brakes before and after a stop.”
Parker said that, despite her conversations with elected representatives, no policy-makers have responded to her demands for safety cameras along Penn Ave. The City could just check the tape, she suggested, and make reckless drivers pay steep fines for their violations.
“Our Mayor says we don’t have enough money to pay for all these things that are so important to us,” Parker insisted. “Well, then how do we come up with fundraising for all this other new stuff?”
She questions how any visions of a “City for All” could include such bad drivers.
On the afternoon of June 8, the last day of school for PPS students, the crossing guard received well-wishes from students and parents who were eager to greet her again in the fall. Despite the satisfaction of finishing out the school year with no harmful incidents, the crossing guard kept the long view in mind while welcoming the last few buses to a safe stop.
“It just seems like [local politicians] are not paying attention to this dangerous situation,” Parker observed.
“Oh, they’ll take notice alright,” her friend, Darlene Summers, interjected, “when some kid gets killed by a car out here. That’s when they’ll finally do something about it.” 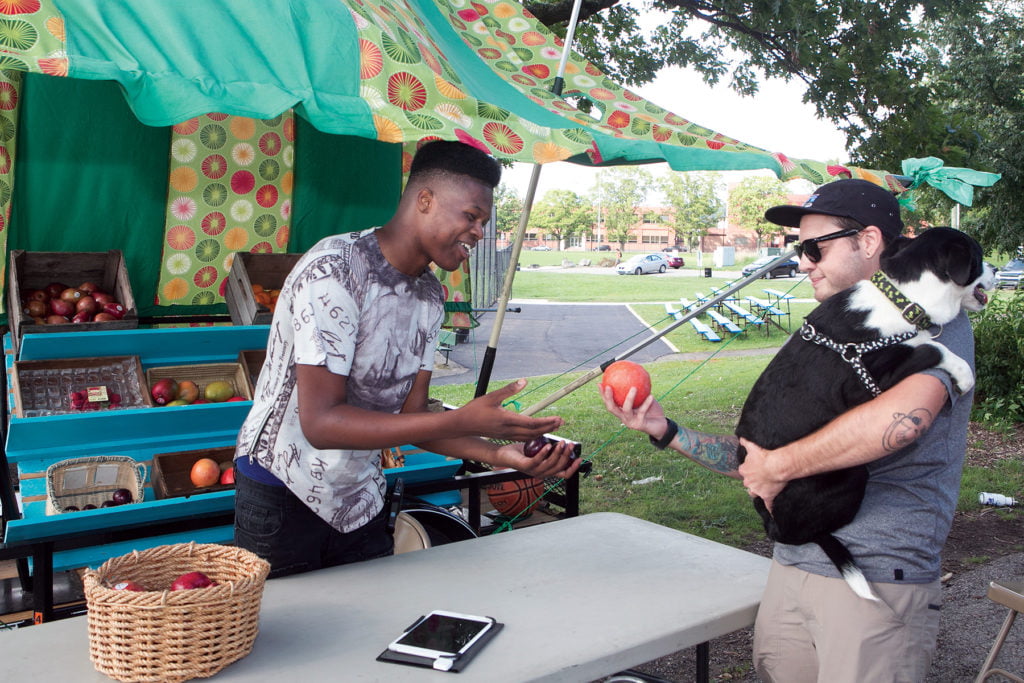 ABOVE: At the East End Fruit Cart in Mellon Park, Jamel Haden (left) helps customers like Lando DePaulo – and his dog Lemmy – find the right fruit on a breezy July day. Haden and his two teenage co-workers use the mobile cart to bring fresh fruit to underserved neighborhoods throughout the city’s East End. Follow the East End Fruit Cart story below. Photo by John Colombo.

East End – Last year, when Tim Lydon returned to his hometown of Pittsburgh after spending many moons living and working on farms out West, he could tell the city had serious issues with food. Not the kind of food issues we often hear about (i.e. “Breaking News: Pittsburgh loves pierogies”), but the kind that many local residents seldom even notice (i.e. food scarcity in underserved neighborhoods).

“I’m really interested in issues of food scarcity and availability here in Pittsburgh. In the East End, there are plenty of places where people have no access to fresh fruits and vegetables.”

Drawing on his understanding of the politics of food, Lydon decided that he could really make an impact by simply bringing fresh food to the people, in their neighborhoods.

So, he created the East End Fruit Cart, a mobile fruit stand that he tows all over the city’s East End. Alongside three teenagers who run the fruit sales, Lydon posts up at a different public venue every day – from Monday through Saturday – to engage in a new kind of community outreach.

Created by a local artist, the cart and its cantilevered drapes are fairly impressive. But, the cart itself – and even the fruit – is only part of the story. What is most impressive is the intentional commerce that is at the heart of the project. On July 24,  the Bulletin visited the fruit cart under Mellon Park’s canopy shade, near the intersection of Fifth and Penn Aves.

“We’re in Homewood and we’re in Larimer, both places that have traditionally been considered ‘food deserts,’” Lydon explained. “We’re also in Oakland, which people might not think of as a food desert. Outside of the farmers markets, there’s nowhere to buy produce in Oakland.”

In response to a question from intrepid Bulletin photographer John Colombo (“Why don’t you take the cart to local farmers markets?”), Lydon replied that he did not want to cut into any other vendor’s profits. Since the fruit cart sources its goods from local grocery stores, he said, it would be unfair to vend at farmers markets, where most vendors sell their own farm-sourced products to make a living.

When looking for funding, he sought counsel from the BGC’s Rick Flanagan, Youth Development Director, and Rick Swartz, Executive Director. Lydon was eventually able to secure “Community Development Block Grant” monies, along with some fruit donations from Trader Joe’s and a cooler from the East End Food Co-Op.

“We just got $1,000 from Eat n’ Park yesterday,” he said. “Then, there is Bridgeway Capital, which is a nonprofit lending institution that has a department devoted to issues of food scarcity. We’re meeting with them next week.” 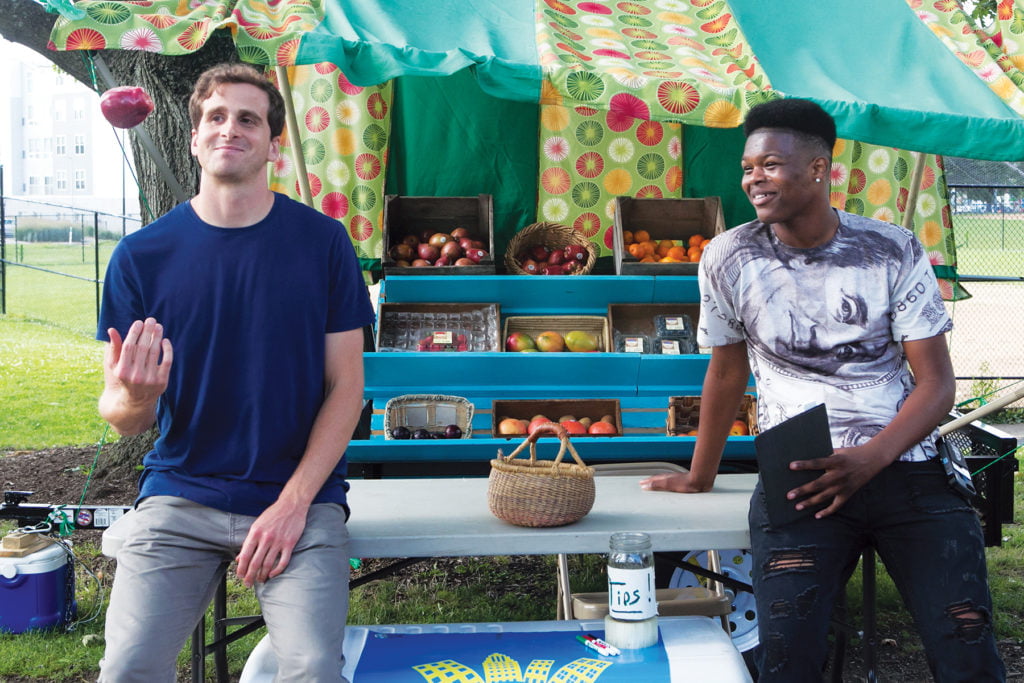 With the grant money on its way, the project vision called for a six-week timeline. Since Lydon could not wait any longer, he took it upon himself to kick-start the fruit cart funding.

“Most of the money still hasn’t come through yet, but I knew this project had to start on June 26. So, I just bought everything on my own credit cards,” he said with a pause. “You could say I’m pretty committed to it.”

Local teenager Jamel Haden, a former Learn & Earn program participant and current BGC employee, works with Lydon to gather data on all the fruit sales. He even learned something about his own palette. “I’d never eaten Kiwi before, but I like it now,” Haden revealed. “I thought it was bitter until I first tried it.”

He asks customers what they think about things like a “fair price” for plums (the cart’s best-seller), then enters that information into a tablet, using Square technology to track spending patterns and what fruit sells best at each location.

“One thing we’ve found is that there has to be an educational component, because people need to know how to prepare fruits and vegetables,” Lydon said. “We need to team up with someone who can teach others how to make healthier choices.”

As part of the project’s social element, Haden and his teenage coworkers at the East End Fruit Cart sat down with representatives from 1Hood, a social justice organization that uses art to raise awareness and mentor young Pittsburghers.

“[1Hood founder] Jasiri X made a real impression on the kids,” Lydon said. “One of them has already applied for an internship [at 1Hood]. You know, it’s important for the kids to meet community leaders who look like them.”

The project’s ultimate goal is to form inroads with local residents and build a network of community supported agriculture (CSA). Lydon believes this idea could create more of a laser-sharp focus on bringing food to neighborhoods that do not have access to fresh foods

“We could identify a neighborhood – for example, Homewood or Lincoln-Lemington or Larimer – and then find kids from that neighborhood to be neighborhood ambassadors,” he explained. “They’d literally be going door-to-door to ask their neighbors if they want to order fresh fruits and vegetables. So, it would be like a CSA program run by kids in each neighborhood.”

Learn more about the cart and its mobile mission to bring fresh food to East Enders at www.eastendfruitcart.com.

Click here for more stories from the August issue of the Bulletin (Vol. 42, No. 8)

The Allegheny Lead Safe Homes Program seeks to identify and control lead-based paint hazards in approximately 175 eligible units throughout Allegheny County, including the City of Pittsburgh.

To find out whether your dwelling is eligible for free lead paint remediation, visit the program’s website. 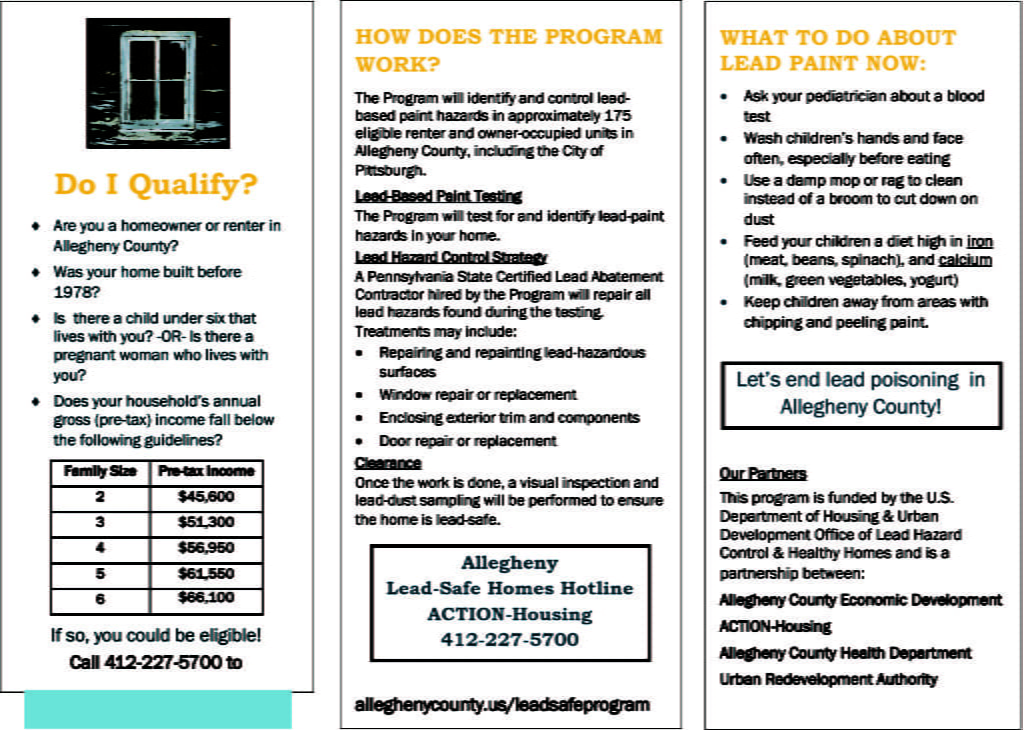 Wellness Wednesdays kick off on Feb. 15th with a heart health event in Garfield. Click here for more info:  http://tinyurl.com/WellWeds 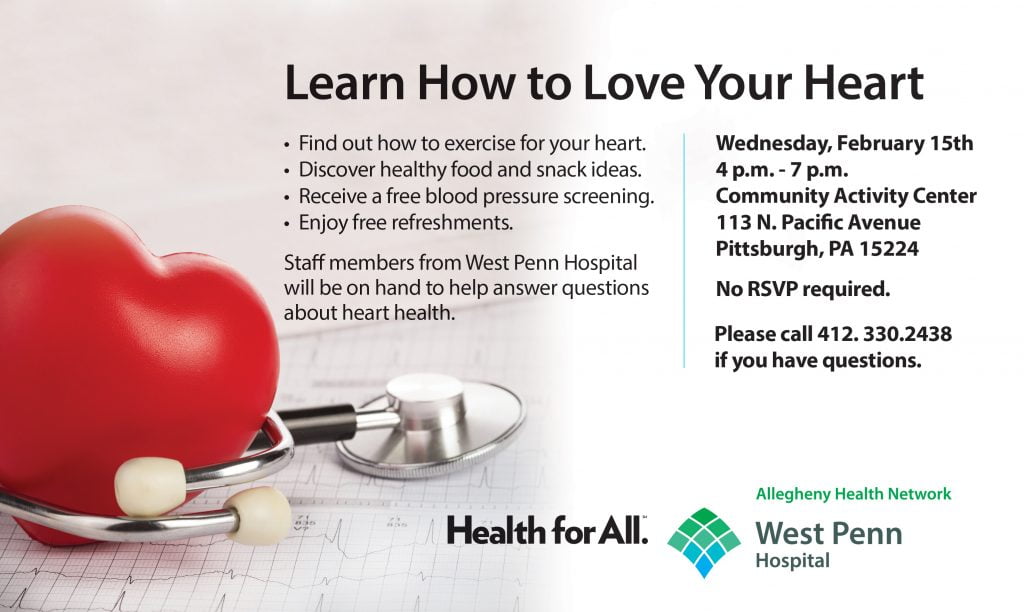