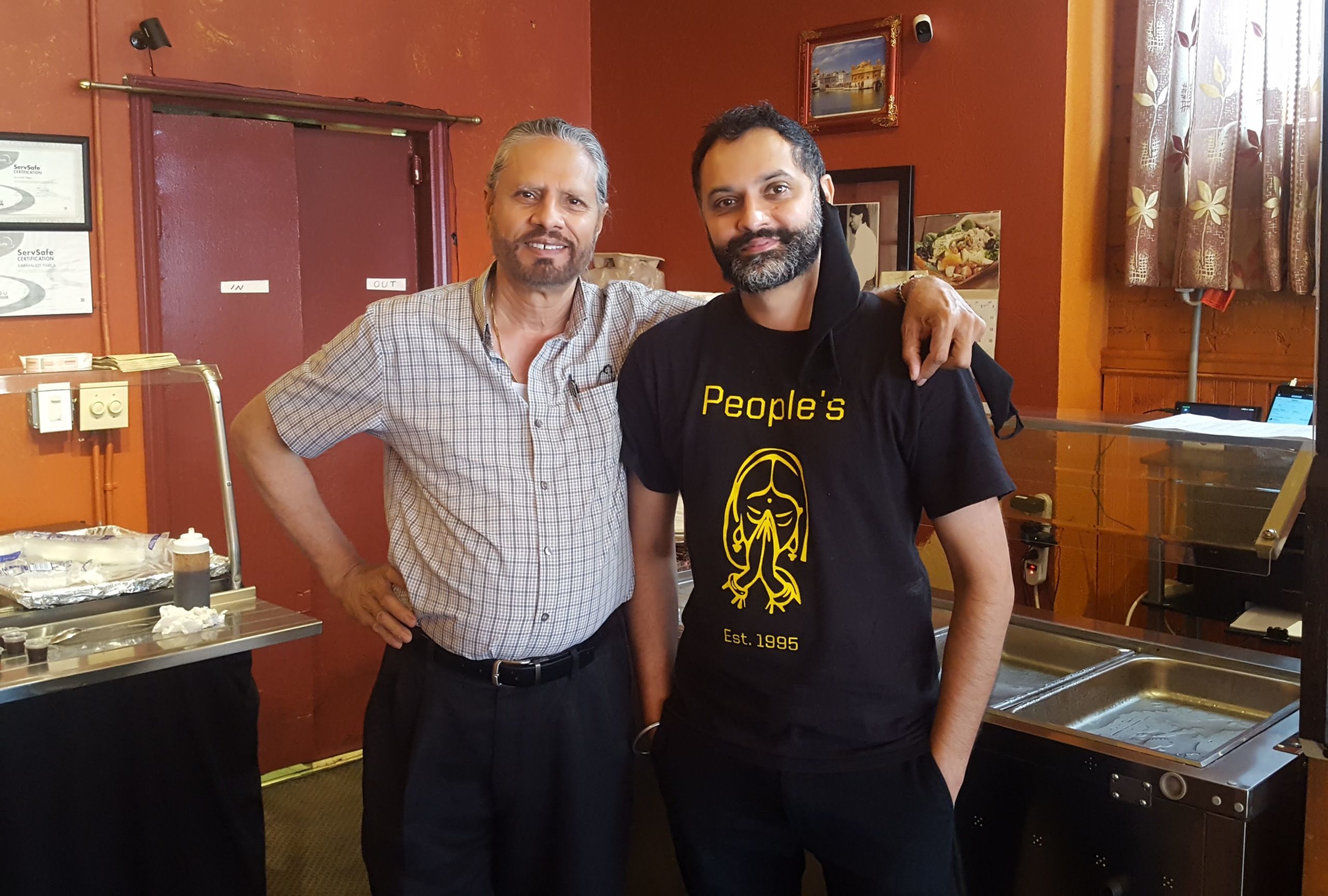 ABOVE: Kulwant Pabla (left) and his son Harpreet are ready for the lunch rush at People’s Indian restaurant. Photo by Andrew McKeon.

Garfield – In 1987, the Pabla family opened People’s Grocery store at 5136 Penn Ave. The store’s opening represented a milestone for Kulwant Pabla, who had recently moved to Pittsburgh while everyone else was busy leaving town.
Building on the grocery store’s success, Kulwant and his brother, Kuldip, opened People’s Indian restaurant (5147 Penn Ave.) across the street in 1995. The rest is history, but the restaurant’s origin story is still unknown to many customers.
The Pabla family hails from Lasara, a small town in the Punjab region of northwest India. Kulwant’s son – Harpreet Pabla, who manages the restaurant – compares the footprint of his father’s hometown to that of the Gators’ home neighborhood.
“Lasara is a little place that’s actually about as big as Garfield,” he explained. As a Sikh growing up in a Hindu-focused India, life was not easy for Pabla’s father. “[Kulwant] is one of four brothers and two sisters, a strong family raised in a third world country. To them, Garfield is literally a ‘land of opportunity,’” he said.
Upon moving from India to Pittsburgh at the age of 11, Pabla had no idea what to expect. “When I moved here in 1993, Garfield was very different than what you see now,” he told The Bulletin. “You had all kinds of gang activity. There used to be an ATM right there [southeast corner of Penn & Evaline]. One time, during a shootout, one of the bullets went though the ATM,” Pabla recalled, “and it travelled all the way to where my uncle and I were standing in the [People’s Grocery] store.”
When the COVID-19 pandemic hit home in March, the Pabla family was already leaning in a charitable direction. Working tirelessly for four months, the family provided upwards of 4,500 free lunches to those in need.
“If you look at relief efforts in every part of the world, Sikhs have been feeding people left and right,” Pabla said. “A few weeks ago, The New York Times ran a headline that was something like ‘If you want to learn how to feed people, learn from the Sikhs.’”
From March through June, the Pablas’ restaurant received all sorts of calls for help. Most of the orders came from local families facing real hardships, but some callers seemed to be exploiting the charity of People’s Indian.
When the restaurant ran out of chicken, on account of national food shortages during the pandemic, the Pablas did not expect people to turn their nose up at free vegetarian food – but they were in for a surprise. “You’d be shocked by how many people said they didn’t want it. They’d say ‘No, I don’t want that, but when you have chicken curry again, let me know,’” Pabla noted. “If you’re choosing, you don’t really need it.”
In 1984, the Indian government sent troops to the Golden Temple – a place of worship – and massacred Sikh women and children en masse. For the next 10+ years, throughout India, young men were regularly “disappeared” by not-so-mysterious agents of the federal government.
“For us, when it comes to Black Lives Matter [BLM], this really hits home,” Pabla said. “As Sikhs, our war has always been against oppression.” The Pablas recently devoted an entire face of their building [at the corner of S. Evaline & Penn] to the BLM movement. “When people say there’s no racism, that’s only because it doesn’t affect them,” Pabla noted. “If you’re not black, and you’re not being hunted, your reality is very different from theirs.”
Although he never knew the Indian caste system while living there, he soon found out in Fox Chapel – as a result of a classroom conversation. “Growing up in India, I had friends from many different castes, which is socially unacceptable,” Pabla said. “My parents wanted me to have a more human perspective that wasn’t shaped by the caste system.”
Pabla still finds it hard to reckon with the dividing lines of American society. “In the Sikh holy book, there are different writings by all sorts of holy men, including Hindus and Muslims,” he explained. “There are members of lower and higher castes whose writings are part of the same foundation. It’s very inclusive.”
Much to the delight of its loyal customers, People’s Indian launched its new pizza menu on Jul. 24. Six gourmet pizzas, including “Singh is King” and “Striaght Outta Punjab,” aim to combine traditional Indian flavors with American tastes.
Pabla knew his pizza concept could succeed, but he never could have predicted the kind of volume that it has generated for People’s Indian. At this point, the restaurant is making 50-60 pizzas every day, which taxes its kitchen.
“I’d love to get some more kitchen space so that we could start something like an Indian bakery that serves cakes and pastries,” Pabla revealed. “It’s a very different flavor; the icing is lighter and it’s not as sugary as American cakes.”
He is excited to support Chislett St. Market, a grocery that his cousin just opened in Morningside – the neighborhood where a teenage Harpreet came of age in the ‘90s. From cake-icing to “life mantras,” Pabla is certain of one thing: “If you put good out there into the world, then good comes back to you.”