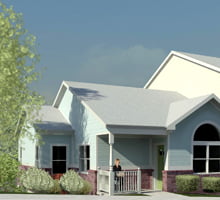 Garfield Highlands – Proposed new construction of 25 scattered-site homes in 5300 block of Kincaid St., 5300 and 5400 blocks of Rosetta St., 200, 300 and 400 blocks of N. Aiken Avenue, 5300 block of Hillcrest St. These would be a mix of two- and three-bedroom homes, affordable to families earning less than $48,000/year. We are currently awaiting a decision from PA Housing Finance Agency on allocation of federal tax credits for the project – and will need the U.R.A. to furnish a loan for $1 million+. Construction could be underway by summer 2021.

Montana Apts. – Renovation of 16 one-and two-bedroom apartments at 5456 Penn Ave. Current mix of tenants have majority earning less than $35,000/year. PNC Bank is weighing approval of a $275,000 loan to Montana Development Corp., with the U.R.A. to provide a loan for $400,000; project partner is Garfield Community Land, Inc.

327 N. Negley Avenue – Site of former B’Nai Israel Synagogue and Urban League Charter School; PA Housing Finance Agency awarded tax credits for 37 affordable one and two-bedroom apts. to be built atop vacant school building. Developers are Beacon Communities (out of Boston) and Catalyst Communities (here in PGH). BGC is serving as an advisor on the possible re-use of the domed sanctuary building as a multi-cultural center. Developers are weighing execution of a partnership agreement with BGC that would have BGC acting as the manager of the new center. Construction of the apartments is due to begin during summer of 2021. Renovation of the sanctuary building could be another 18 to 24 months away, depending on completion of a $5-6 million capital campaign.

BGC carries out the role of owner or partner in the following developments:

• Partnered with S&A Homes on both developments (managed by NDC Real Estate).
• BGC reviews major management decisions around rental policies, evictions, and additional investments in the homes.
• BGC is the first point of contact for tenants or neighbors wishing to speak with the owners.
• At the end of the initial 15-year leasing period, BGC will control 51% of the ownership interest in the developments, and S&A 49%. Tenants will have the option to buy their homes outright in year 16.

• BGC is staff to its nonprofit owner, the Montana Development Corp., a 501 (c) (3) created by the BGC and Friendship Development Associates (FDA) in 1991 to renovate what had been a group home. East End Cooperative Ministry (EECM) was a third partner in the project. FDA and EECM have since withdrawn from active involvement.
• Board is being reconstituted to include representatives from Garfield Community Land, Inc.
• Building is managed by Catranel Realty, Inc.
• See summary above for the latest developments with the building.

• FDA and Dollar Bank have withdrawn from the limited partnership, leaving BGC as the sole remaining partner
• Units are rented to individuals or families at 60% or less of median household income
• BGC manages the six units in-house.

Laurentian Hall Apts. – 36 efficiency, one-bedroom and two-bedroom apts., designated for elderly or disabled persons who are at 50% of median household income or less.

• Owned by separate 501 (c) (3), governed by a board on which BGC holds two seats
• ACTION-Housing, Inc. and St. Maria Goretti Church have been partners in the project
• Building is managed by NDC Real Estate Management.
• BGC formerly leased ground-floor space for its employment center and youth programs, but has since relocated to the Activity Center building located at 113 N. Pacific Avenue.

5635 Stanton Avenue – 11 one-, two-, and three-bedroom units situated in former mansion (with a carriage house located behind it).

– Tenants are at 50% or less of median household income
– Owned by a limited partnership of which BGC and Highland Park CDC are 50/50 partners.
– Managed by NDC Real Estate Management
– U.R.A. recently approved a loan of $110,000 to limited partnership for exterior and interior improvements.