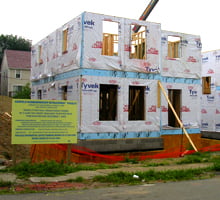 For almost 40 years, the BGC has found ways to renovate vacant homes, or build new ones. The organization completed 48 new homes in Garfield between 2002 and 2014. The BGC’s goal has been to ensure that current residents can remain in their homes while also providing opportunities for families who meet affordable housing income guidelines to become first-time home buyers in the neighborhood.

In 2017, the BGC began an initiative to allow for the construction or renovation of single-family homes in Garfield that feature a second unit that can be rented by the owner. Known as accessory dwelling units, or ADUs, they can help reduce the monthly cost to the homeowner. The Henry Hillman Foundation awarded the BGC a grant of $210,000 to help make possible the construction of three houses on Hillcrest St. in Garfield, each of which will have a second unit on the ground floor.

East Liberty Development, Inc., is also active in Garfield creating homeownership opportunities for working-class families. ELDI has raised more than $1.2 million in connection with the renovation of seven, long-vacant houses, and will collaborate with the BGC and Open Hand Ministries, another Garfield organization, in identifying and qualifying first-time homebuyers for the units as they near completion.

A 16-unit apartment building that the BGC was instrumental in renovating in 1992 at 5456 Penn Avenue underwent a second rehabilitation in 2020. The new land trust organization in Garfield will join the BGC as a co-owner of the building in making over $400,000 in repairs and improvements to the Montana Apartments, using a combination of bank financing and U.R.A. funding. This will enable the building to remain affordable for the long-term tenants earning less than $36,000 annually.

The BGC has been provided grants of up to $1,200 to lower-income homeowners
to make critical repairs or improvements to their properties. The funds came from
a $20,000 grant from the PNC Bank Foundation. The homeowner has to provide
a match either from their own funds or from outside sources. Volunteer labor can
also count as their match.