On November 1, 1975 at St. Lawrence O’Toole Roman Catholic Church in Garfield, the Rev. Leo Henry gathered parishioners, business people, and residents of the Bloomfield and Garfield neighborhoods. As he observed a community spiraling downward from a decade of physical and economic decline, he felt compelled to do something to address its future. 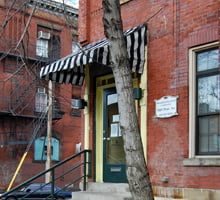 Father Henry challenged his audience that night to help him launch a community organization that could confront the neighborhood’s growing problems. Scores of volunteers would help drive a program of advocacy, planning, and revitalization activity in the Penn Avenue commercial district and the surrounding neighborhoods. Using the sale of $5 membership “shares,” he made each person a stockholder in this new engine for change. Over 500 of those shares would be sold in the weeks and months to come, and the Bloomfield-Garfield Corporation was officially born in January of 1976. That month, Father Henry also launched the Bloomfield-Garfield Bulletin, a community newspaper to “promote a spirit of community.” With the community behind it, the BGC began work to reverse the neighborhood’s decline. With the support of the community and an $85,000 investment from Pittsburgh City Council, the BGC began working to reverse the neighborhood’s decline.

Since those early successes, the BGC has continued to fight for the health of the community.

Penn Avenue revitalization begins as residents and business owners commit over $2.5 million in deposits for Equibank to open the first branch banking office on Penn Avenue since the Great Depression. Other victories followed with the opening of a pharmacy, a dairy store, and an auto repair shop.

The BGC becomes the first community group in Pittsburgh to receive an allotment of federal community block grant funds from City Council for the purpose of hiring its own staff.

Construction of new, single-family homes on hundreds of vacant lots in Garfield begins.

St. Margaret Memorial Hospital in Aspinwall opens a family medical center in a vacant storefront at the corner of Penn and S. Evaline Street. That center, under the leadership of Dr. Ann McGaffey, now sees more than 600 patients from the community every month in a modern facility at 5475 Penn Avenue.

The first million-dollar investment to Penn Avenue in over 20 years begins as a vacant commercial laundry at Penn and N. Atlantic that is converted into Champion Commons, a first-class office building.

A vacant school building next to St. Lawrence O’Toole Church is renovated and converted into the Laurentian Hall Apartments for seniors.

The BCG spins off the Friendship Development Associates (FDA) to address the decline of the housing market in that neighborhood.

The BGC begins renovations on a 10-unit apartment building at 205 S. Millvale Ave. and the construction of 12 for-sale townhomes at Mossfield Court in Garfield.

A vacant church on N. Pacific Avenue in Garfield is transformed into the Community Activity Center. The BGC and local residents also create the Garfield Youth Sports, offering football and cheerleading programs every fall for more than 180 boys and girls from Garfield and other East End neighborhoods.

The BGC begins its relationship with the City of Pittsburgh to provide employment placement services for teens and young adults in the community.

Three major projects commence to provide affordable housing for the residents of Garfield: with cooperation of the Highland Park CDC, a vacant mansion and carriage house at 5635 Stanton Avenue is transformed into 11 affordable rental units; the Negley Place Neighborhood Alliance works with the BGC in converting a Victorian house at 5548 Hays Street into three condominium units; and FDA helps in the purchase and conversion of four historic row houses in the 5400 block of Penn into six spacious rental units for families.

The BGC commissions “The Bride on Penn Avenue,” a mural by artist Judy Penzer, on a building at the corner of Penn and N. Graham – a block that has since become affectionately known as “Bride’s Row.”

The Penn Avenue Arts Initiative (PAAI) is born, and with it the chance for the BGC and the Friendship Development Associates to emphasize the arts as a route to revitalization of the commercial district. A number of artists and small entrepreneurs tap into a pool of loans and grants offered by the PAAI to do interior or exterior improvements to buildings in the 4800 to 5500 blocks of Penn Avenue.

The BGC and Garfield Jubilee Association complete a neighborhood plan that provides the impetus for construction of 50 new, single-family homes in Garfield over the next few years.

Provision of expanded after-school and summer programs by the BGC for students at Fort Pitt Elementary and Peabody High schools become possible, thanks to a contract with a new East End nonprofit, Wireless Neighborhoods.

Construction is completed on 60 apartments for low-income seniors who were relocated from two public-housing high-rises – the Penn Fairmont Apartments. Also included in the space are 7,000 square feet of retail space on the first floor, which the FDA will own and manage.

The site of the closed St. Joseph’s Nursing Home on Penn Avenue becomes a new facility for the Children’s Home of Pittsburgh.

Citizens Bank and WPXI-TV honor the BGC as a “Champion in Action.”

A plan developed in 2000 (see above) to build 50 new single-family homes in Garfield enters its final phase, with 31 houses developed and 29 of those sold.

In collaboration with Garfield Jubilee, the BGC spearheads “Garfield 2030,” a 20-year housing and land-use plan to promote long-term sustainability for Garfield.

Engineering begins on Phase 1 of Penn Avenue Reconstruction Project, a $5.5 million plan to revitalize the four blocks between Mathilda and Evaline with new paving, sidewalks, lighting and signals.

The BGC and co-developer S+A Homes receive tax credits from PA Housing and Finance Agency and a loan from the Urban Redevelopment Authority for the construction of 45 scattered-site rental properties, called “Garfield Glen.”